Making a fresh-hopped beer is in many ways like performing an organ transplant (except lower stakes). It’s all about timing and coordination. The whole object is to get the hops harvested and into a beer in as short a time as possible, while handling them ever so gently. We decided to make an IPA featuring Centennial hops freshly harvested from nearby Four Star Farms.

Four Star awesomely invited us, along with a bunch of local brewers, to check out the farm and observe the hop harvest. They’ve got this crazy wolf harvester machine that pulls the cones off of the bines ever so gently.

Most IPAs are made with dried, sometimes pelletized hops. The opportunity to use freshly picked, moist hop flowers comes but once a year, so we decided to have 30 pounds of hops sent to us directly after harvesting. The folks at Four Star were awesome about getting the hops to us on time. We had to choose a day to brew the beer so that a fermentation tank was available, our other ingredients could be purchased ahead of time, and most importantly, so that the hop harvest would occur then.

So, while our hops were being packaged and sent super-express mail, we were getting ready to begin our brew. The next morning, the grain was prepped and the mash awaited the arrival of hops. Fortunately, around 7:20am, the hops arrived in two mesh sacks. 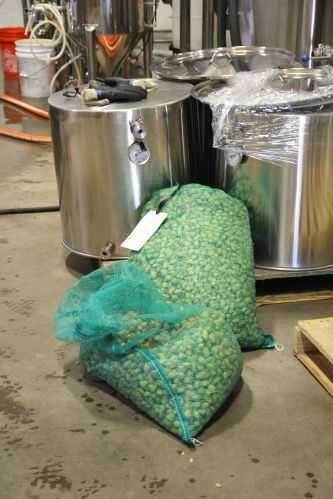 We used the hops in the mash to add a fresh hop aroma to the beer. Later, the remaining fresh hops were placed in a vessel to be used as a hopback. We ran the freshly brewed wort through this hopback to extract more hoppy, fresh and ‘green’ flavors.

Total time from harvest to brew: 22 hours. Next year we’ll try to shave it down to 21. Three weeks later, the beer is ready to drink! Taste the Massachusetts-grown freshness!

View all posts by aeronautbrewing